Archaeologists surveying the waterways of suburban Seattle have made a discovery that’s likely the first of its kind in the region — an ancient tool-making site dating back more than 10,000 years.
The find includes thousands of stone flakes, an array of bifaces, scrapers, and hammerstones, plus several projectile points, some of which were fashioned in a style that experts describe as “completely new” for this region and period in its history. 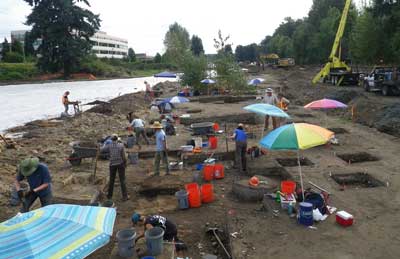 The stone tools were found in Redmond, Washington, in a layer of material along Bear Creek that was dated between 10,000 and 12,500 years ago. (Courtesy R. Kopperl/SWCA)
The site was discovered along a creek in Redmond, Washington, under a layer of peat that was radiocarbon dated to about 10,000 years ago.
And in the layer with the artifacts were burned bits of willow, poplar, and pine, which were themselves dated between 10,000 and 12,500 years ago.
Together, these materials frame a period of prehistory in coastal Washington which archaeologists have not been able to explore before.
While other sites in Washington’s lowlands have produced animal remains from the end of the last Ice Age, this is the first discovery of stone tools that date back more than 10,000 years, according to Dr. Robert Kopperl, lead researcher of the find.
“It’s the oldest artifact assemblage from western Washington, and the excellent context in which we were able to do our excavations and sampling is now providing a picture, much clearer than ever before, of the environment these people were living in during the transition out of the Ice Age,” he said.
Kopperl, from the firm SWCA Environmental Consultants, and his colleagues first made the find in 2008 while surveying a waterway known as Bear Creek, as part of a salmon habitat restoration project.
Initial work turned up some stone artifacts above the layer of peat— a remnant of a time when the area was inundated with wetlands and lakes — which seemed to resemble a peat layer nearby that was about 3,500 years old.
But radiocarbon results showed that the newly found peat was between 8,000 and 10,000 years old. 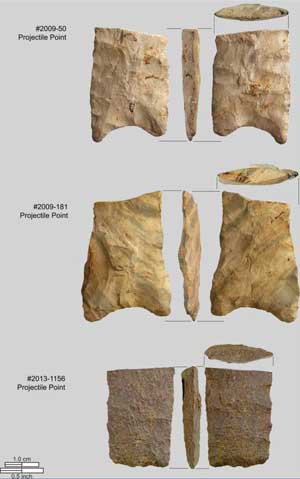 Two concave bases and a stemmed base are among the fragments of stone tools, dated to more than 10,000 years old, found at the site. (Courtesy R. Kopperl/PaleoAmerica)
“That in itself was interesting,” Kopperl said, “and then when we did our 2009 test excavations, all of the artifacts we found were below that peat instead of above the peat, indicating that they pre-dated 10,000 years before the present.”
The team then knew that it had a unique chance to plumb the depths of an important time in western Washington’s past, when the period marked by the last Ice Age — known as the Pleistocene — transitioned into the epoch in which we live today, called the Holocene.
“This was the first opportunity anyone has had to conduct an archaeological excavation of a Late Pleistocene-Holocene transition lithic-bearing site in the western Washington lowlands,” Kopperl said.
Once they picked up traces of human habitation older than any other found in the region, the researchers hoped to encounter artifacts that had never been found there before.
“We figured once we began finding diagnostic artifacts that they would be different from those of the later local technological traditions,” he said.
“Sure enough, we found two projectile point fragments that were concave-based – something not seen at any time in the local projectile point sequence.”
In all, six projectile points and base fragments were found at Bear Creek.
The two points with concave bases somewhat resembled Clovis points, which have been found elsewhere in the region but without clear archaeological contexts, Kopperl said.
But rather conspicuously, both newfound artifacts lacked the distinctive fluting that’s typical of the Clovis style.
Meanwhile, he added, a third point fragment was “reminiscent” of a style known as the Western Stemmed Tradition, which is typically found farther inland, in the interior Northwest and the Great Basin.
[For example, read about this recent discovery: “13,500-Year-Old Tool-Making Site Uncovered in Idaho Forest“]
“The concave-based points are different from any other forms found in western Washington, from any time period,” Kopperl said.
“As far as the projectile point sequence in western Washington, which only really developed for the time periods after 10,000 [years ago], those points are completely new.”
As for the lifeways of the people who made and used these tools ten millennia ago, the clues are scant.
Residue analysis of several fragments, for instance, turned up traces of plants like beeweed, and proteins from bear, bison, deer, sheep, and salmon.
[See another unusual hunting site: “2,500-Year-Old Bison-Kill Site Offers New Clues Into Ancient Culture of Northern Plains“]
Beyond that, there’s not much context to draw on in western Washington, Kopperl said, because no other artifacts have been found that date this far back in time.
“There hasn’t been a formal technological tradition or culture-historical phase yet defined for this early time period in western Washington,” he said.
“What we’re looking at certainly deserves a more formal designation, but more data points would certainly help.” 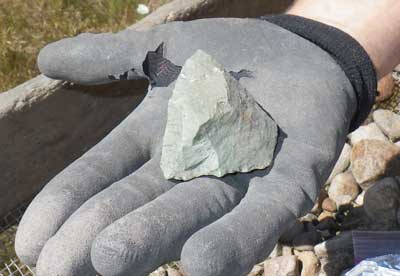 Artifacts found at Bear Creek also include tools like bifaces (pictured), cobbles, hammerstones and unifaces, some of which revealed residues of bison, bear, sheep, deer, and salmon. (Courtesy R. Kopperl/SWCA)
For now, the discovery along Bear Creek suggests that, even in an area as developed as Seattle, there is still much more to learn about the environment and human culture of the coastal Northwest at the end of the Ice Age.
[Read about a related new discovery: “Stone Tool Unearthed in Oregon ‘Hints’ at Oldest Human Occupation in Western U.S.“]
“Now that we finally have investigated a western Washington site [from the Late Pleistocene-Holocene] in good archaeological context, instead of a few isolated Clovis points without context, we can no longer simply say it’s a ‘poorly understood’ early period in the archaeological history of the area, which lots of archaeology reports like to say, because it’s easy to say that.”
In fact, he added, “there are probably other Late Pleistocene-Holocene sites preserved in similar modern settings in the Lowlands, and we should be on the lookout for them.
“Also, this is confirmation that these kinds of sites do actually still survive in a rapidly developing place such as suburban Seattle,” Kopperl continued.
“The old conventional wisdom amongst archaeologists regarding the western Washington lowlands was that this is an uninteresting place to study the earliest peoples, and a geographic ‘cul de sac’ in terms of larger patterns of Late Pleistocene-Holocene settlement and migration, and also that any such early remains in this area would not likely have survived the sea level rise of the early-mid Holocene or modern construction development.
“Bear Creek strongly contradicts that conventional wisdom.”
Kopperl and his colleagues report their findings in the journal PaleoAmerica.
_________________
Vente d'objets préhistoriques reconstitués :
http://revivre-la-prehistoire.wifeo.com