On a remote forest riverbank in northern Idaho, archaeologists have uncovered evidence of human occupation going back more than 13,500 years, adding to the signs of an increasingly ancient human presence in the Northwest, and fueling the debate about how the region’s earliest settlers got there.
The oldest evidence, found in test pits dug along the North Fork of the Clearwater River, includes a blade-like tool fashioned from a rock cobble and dozens of flakes left over from the tool-making process, known as debitage.
The artifacts were found in a layer of soil with charcoal that was radiocarbon dated to 13,740 to 13,490 calendar years ago. 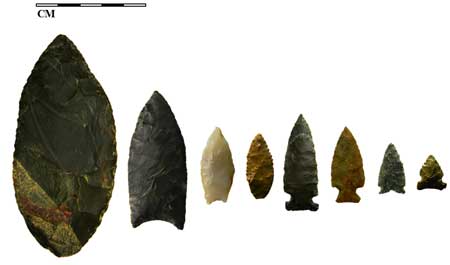 More than 13,000 years of use at Kelly Forks are revealed in the array of stone points found there, including a Goshen point from the Northern Plains (second from left) and the oldest from the Western Stemmed Tradition (third from left) (Photo courtesy Laura Longstaff)
Perhaps more important, a few layers above those ancient finds, researchers found 19 detailed and distinctive stone points, fashioned in what’s known as the Western Stemmed Tradition.
The oldest of them dating to just over 11,000 years ago, these points are the signature of a culture whose traces have been found throughout the Great Basin and the Northwest.
Western Stemmed points discovered elsewhere have been dated to a similar range as the Idaho finds, and in some cases even earlier, including Oregon’s Paisley Caves, where samples have been dated, somewhat controversially, to more than 14,000 years old.
[Read about the latest research from Paisley Caves: “Ancient Feces From Oregon Cave Aren’t Human, Study Says, Adding to Debate on First Americans“]
Taken together, the range of artifacts found at the Idaho site, known as Kelly Forks, suggests long and regular use by ancient hunter-gatherers, primarily for making tools and processing game, according to Laura Longstaff of the University of Idaho, who reported her team’s findings at the annual meeting of the Montana Archaeological Society.
“There is enough material associated with the earliest dates to get an idea of the animals they hunted, tools they were making, stone they used at 13,000 years ago,” she said in an interview.
“And just having anything associated with these dates is enough to get excited about.”
Chemical analysis of the flake tool revealed it to have traces of proteins associated with rabbit flesh, she added, “so that means that people were using rabbit as a resource during the earliest occupation we encountered at the site, which is really cool.”
But the more recent, 11,000-year-old points found at Kelly Forks are equally significant, she said, because they add important new data to the mounting evidence of the Western Stemmed Tradition in the Northwest.
They may also shed light on the Tradition’s proximity, if any, to the Clovis, whose own unique tools found throughout North America suggest they were the first widespread culture on the continent.
[Read about recent DNA research into the Clovis culture: “Genome of America’s Only Clovis Skeleton Reveals Origins of Native Americans“]
“As research progresses on the Western Stemmed Tradition … it is looking like the people who produced this type of tool were here in the Pacific Northwest before Clovis peoples, but during the same period when Clovis peoples were moving through other regions of North America,” Longstaff said.
The prevalence of Western Stemmed Tradition artifacts in the Northwest, known locally as Windust, also suggests that its members may represent a separate wave of human migration to this part of North America, she said, with migrants having come from the north not by ice-free corridors near the middle of the continent, as some models maintain, but by way of the Pacific coast.
“This is supported by the archaeological record in the Clearwater River region, where the earliest material found is associated with Windust,” Longstaff said.
“Kelly Forks is another of the sites added to the record which potentially contains material left by the first people to call the Northwest home.”
The chemistry of the points also reveals clues about the travels and trade that the ancient hunter-gatherers engaged in.
Using a technique known as x-ray fluorescence, Longstaff and her colleagues were able to compare the Kelly Forks tools with geological deposits known to have been used for tool-making. 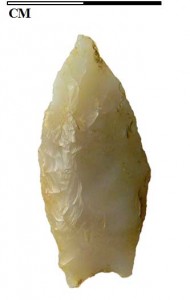 The oldest stemmed point dated to about 11,000 years ago. (Photo: Laura Longstaff)
Results showed that more than a quarter of the artifacts sampled were a type of volcanic rock called vitrophyre from a quarry about 50 kilometers to the south.
But nearly as many were fashioned out of rock from a deposit across the Bitterroot Mountains in what’s now Montana, and some samples hailed from as far away as central Oregon.
In addition, two points reflected styles that were specific to the Northern Plains.
“It shows how far these materials traveled to get to Kelly Forks, either by trade or direct movements of people, and it also shows the resources available to people nearer the site,” she said.
In the end, Longstaff said, the site reflects a depth of human activity that’s rare in the Northwest’s archaeological record.
“Kelly Forks didn’t serve as a village site or long-term residence, but rather a favored stopping place that people used to rest, work on tools, fish, and process game,” she said.
“The special thing is that the volume of artifacts indicates that many different people were stopping there at different times of the year and maybe even just a few days apart.
“I think the region was an active place where people were constantly coming and going on their way to collect the next available resource, or on their way home for the winter.”
While there’s plenty of work to be done on the artifacts found so far, she says there are no current plans by the Forest Service to investigate Kelly Forks more thoroughly.
“If I can stay in the area, I don’t think I’ll be able to resist,” she said.
_________________
Vente d'objets préhistoriques reconstitués :
http://revivre-la-prehistoire.wifeo.com