HOW SMART WERE HUMAN-LIKE SPECIES OF THE STONE AGE? NEW RESEARCH PUBLISHED IN THEJOURNAL OF ARCHAEOLOGICAL SCIENCE BY A TEAM LED BY PALEOANTHROPOLOGIST APRIL NOWELL OF THE UNIVERSITY OF VICTORIA REVEALS SURPRISINGLY SOPHISTICATED ADAPTATIONS BY EARLY HUMANS LIVING 250,000 YEARS AGO IN A FORMER OASIS NEAR AZRAQ, JORDAN.
The research team from UVic and partner universities in the US and Jordan has found the oldest evidence of protein residue — the residual remains of butchered animals including horse, rhinoceros, wild cattle and duck — on stone tools. The discovery draws startling conclusions about how these early humans subsisted in a very demanding habitat, thousands of years before Homo sapiens first evolved in Africa.
The team excavated 10,000 stone tools over three years from what is now a desert in the northwest of Jordan, but was once a wetland that became increasingly arid habitat 250,000 years ago. The team closely examined 7,000 of these tools, including scrapers, flakes, projectile points and hand axes (commonly known as the “Swiss army knife” of the Paleolithic period), with 44 subsequently selected as candidates for testing. Of this sample, 17 tools tested positive for protein residue, i.e. blood and other animal products.

“Researchers have known for decades about carnivorous behaviours by tool-making hominins dating back 2.5 million years, but now, for the first time, we have direct evidence of exploitation by our Stone Age ancestors of specific animals for subsistence,” says Nowell. “The hominins in this region were clearly adaptable and capable of taking advantage of a wide range of available prey, from rhinoceros to ducks, in an extremely challenging environment.”
“What this tells us about their lives and complex strategies for survival, such as the highly variable techniques for prey exploitation, as well as predator avoidance and protection of carcasses for food, significantly diverges from what we might expect from this extinct species,” continues Nowell. “It opens up our ability to ask questions about how Middle Pleistocene hominins lived in this region and it might be a key to understanding the nature of interbreeding and population dispersals across Eurasia with modern humans and archaic populations such as Neanderthals.” 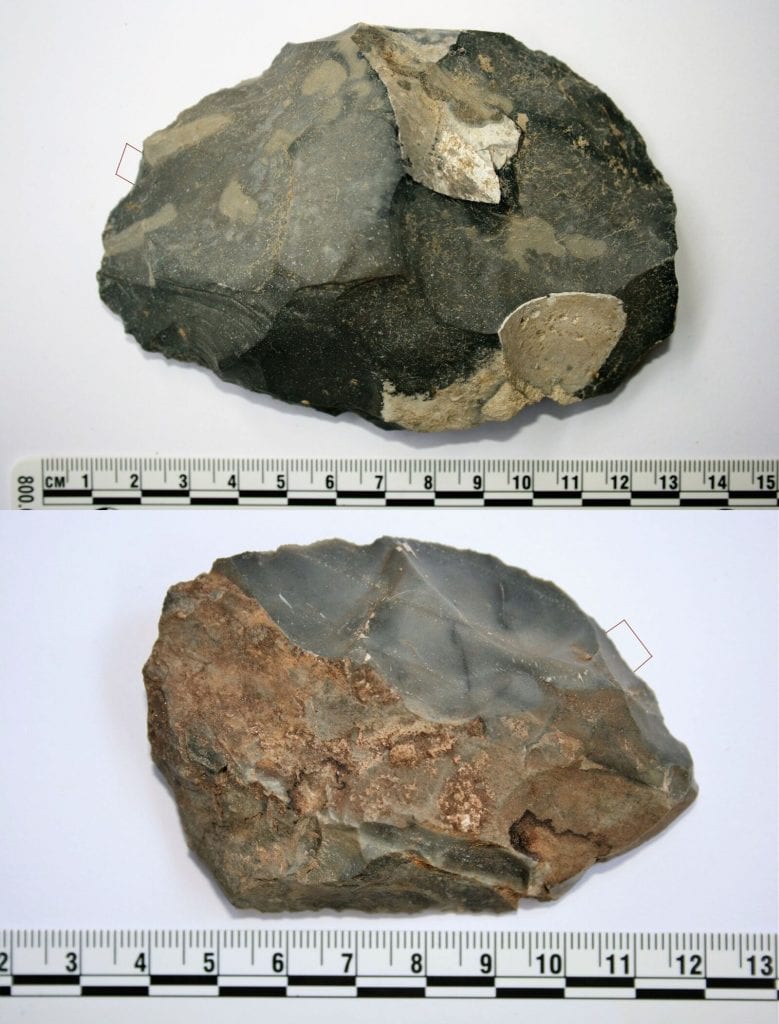 Another result of this study is the potential to revolutionize what researchers know about early hominin diets. “Other researchers with tools as old or older than these tools from sites in a variety of different environmental settings may also have success when applying the same technique to their tools, especially in the absence of animal remains at those sites,” adds Nowell.
Background:
The new paper, “Middle Pleistocene Subsistence in the Azraq Oasis, Jordan: Protein residues and other proxies,” will appear in the September issue of the Journal of Archaeological Science, 73 (2016) 36-44, published by Elsevier. The paper is co-authored by Nowell and Daniel Stueber of the University of Victoria; Christopher Ames, also of UVic and of the University of California, Berkeley; Cameron Walker of Oregon Health and Science University; Carlos Cordova of Oklahoma State University; James Pokines of Boston University School of Medicine and with the Office of the Chief Medical Examiner in Boston; Regina DeWitt of East Carolina University; and Amer Al-Souliman of Hashemite University, Jordan.
Hominins, a term only recently in common use by paleoanthropologists, includes our ancestors (Homo sapiens, Neanderthals, Denisovans) and other extinct human species, but also all of the Australopithecines and other ancient forms such as Ardipithecus andParanthropus.
The Residue Analysis Lab of Archaeological Investigations Northwest, a company located in Portland, Oregon, conducted the biochemical testing on the 44 stone tools.
In Jordan, the Department of Antiquities and the Azraq Wetland Reserve of the Royal Society for the Conservation of Nature provided assistance and permissions to conduct the excavation work in the site located in the centre of the Azraq Basin of Jordan’s Eastern Desert. Having attracted hominin populations for at least 300,000 years, this particular region is a very rich area for archaeological discovery.
Nowell has been working in Jordan for more than 15 years and with this team at this excavation site since 2013. Two UVic graduate students were also involved in the excavation.
UNIVERSITY OF VICTORIA
_________________
Vente d'objets préhistoriques reconstitués :
http://revivre-la-prehistoire.wifeo.com