The mystery of Neandertal's massive eyes

The mystery of Neandertal's massive eyes

Our extinct cousins had eyes much larger than ours. Were these giant peepers the reason for the Neanderthals' demise, or the secret of their success?

We won't ever come face to face with a real-life Neanderthal. They went extinct thousands of years ago. All we can do is use their remains to reconstruct what they were like.
In many ways they were a lot like us. In fact they were so similar, our species actually interbred with theirs.
Nevertheless there were some differences. One stands out: they had weirdly large eyes.
On the face of it, big eyes sound like a good thing. Presumably, having bigger eyes meant the Neanderthals could see better than us.
But according to one controversial theory, Neanderthals' big eyes played a key role in their demise. 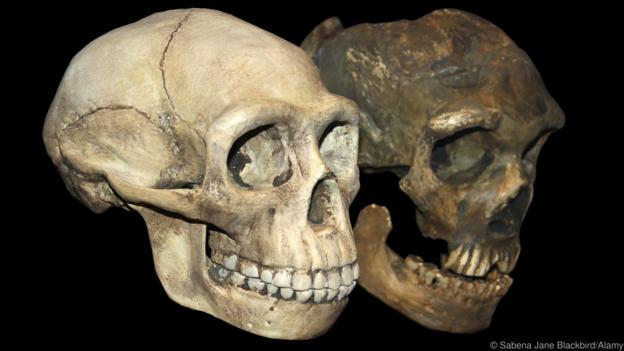 Neanderthals were around before we evolved. They first appeared around 250,000 years ago and spread throughout Europe and Asia.
Our own species, Homo sapiens, evolved in Africa about 200,000 years ago. They reached Europe around 45,000 years ago, and found it was inhabited by Neanderthals.