The frozen remains of a horse more than half a million years old have reluctantly given up their genetic secrets, providing scientists with the oldest DNA ever sequenced.
The horse was discovered in 2003 in the ancient permafrost of Canada’s west-central Yukon Territory, not far from the Alaskan border.
And although the animal was dated to between 560,000 and 780,000 years old, an international team of researchers was able to use a new combination of techniques to decipher its genetic code.
[Read about another recent find: “Wyoming Cave Yields a Trove of Ice Age Fossils — and Ancient Animal DNA“]
Among the team’s findings is that the genus Equus — which includes all horses, donkeys, and zebras — dates back more than 4 million years, twice as long ago as scientists had previously believed. 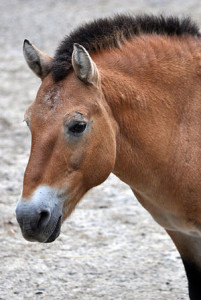 The Przewalski’s Horse, which lives on the steppes of central Asia, likely deviated from the lineage leading to modern domesticated horses some 50,000 years ago. (Photo: Joe Ravi)
“When we started the project, everyone — including us, to be honest — thought it was impossible,” said Dr. Ludovic Orlando of the University of Copenhagen, who coordinated the research, in a statement to Western Digs.
“And it was to some extent, with the methods available by then. So it’s clearly methodological advances that made this possible.”
Orlando and his colleagues published their findings this summer in the journal Nature; he discussed them today in a lecture at The Royal Society, London.
Previous to this, the oldest genome ever sequenced was of a 120,000-year-old polar bear — no small feat considering that the half-life of a DNA molecule is estimated to be about 521 years.
By this reckoning, even under the best conditions, DNA could remain intact for no more than 6.8 million years.
[See this recent and amazing find: “First Columbian Mammoth With Hair Discovered on California Farm“]
But Orlando’s team was able to make the most of what they had for a number of reasons, he said.
The fact that the remains were frozen helped slow the rate of decay. But they also “targeted specific DNA preservation niches,” he said, like the protein called collagen found in the animal’s bones, which is more DNA-rich than other tissues.
“But also we pioneered the usage of what is called true Single Molecular Sequencing that basically reads through molecules as they stand, without further manipulation,” Orlando added.
By tracking a full, single DNA molecule, the team was able to avoid having to “amplify” fragments, which can often introduce errors.
To get a better sense of what this new, ancient genome held, Orlando’s team compared it against that of a 43,000-year-old horse, plus modern domestic horse breeds, and finally the Przewalski’s horse, an equid that makes its home on the Asian steppes and holds the title as the last surviving population of wild horses.
These full-genome comparisons allowed the scientists to construct “a molecular clock” that can reveal benchmarks in the horse’s evolutionary history, Orlando said.
And first among its revelations is that the shared ancestor of all horses, donkeys, and zebras lived more than 4 million years ago.
“So basically we know that members of the genus Equus are at least twice as old as previously believed,” he said.
The comparisons also shed light on genetic variations, and therefore population size, over time, Orlando noted, revealing “bursts of expansion” during cooler periods as grasslands grew, and contractions in size during times of warming.
[Learn more about how global warming  affected the size of prehistoric mammals: “Prehistoric Global Warming Caused Dwarfism in American Mammals, Fossils Show“] 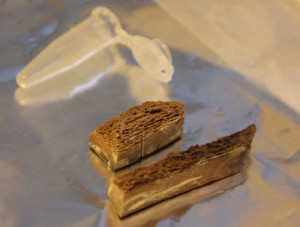 Two pieces of the 700,000 year-old horse metapodial bone, just before being extracted for ancient DNA. Photo: © Ludovic Orlando
The next, most obvious subject for these DNA-decoding techniques are early human ancestors, he said.
Methods like those used on the ancient horse could be applied to determine, for example, how human species like Homo heidelbergensis may have been related genetically to Homo neandertalensis and modern humans, he said.
[Explore the ancient human history of the Yukon: “Butchered Bones Found in Yukon Cave Bear Marks of Early Americans, Study Finds“]
“Basically genomes of that age will enable us to test the validity of the many paleontological species in our family tree,” he said, “and to determine how they relate to each other, and whether they exchanged genes or not.”
“It’s not the future,” he said of whether this technology is in reach.
“It’s basically already there.”