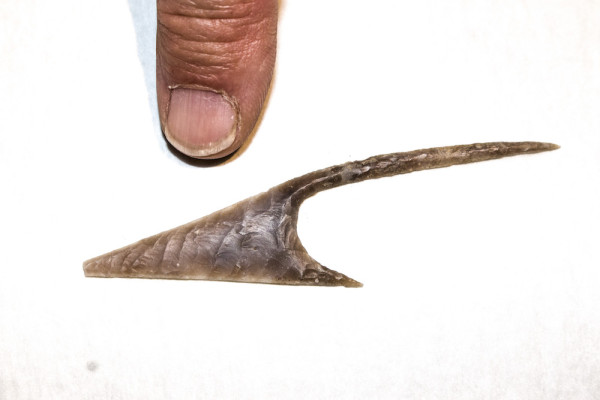 Four and a half thousand years ago, halfway between Stonehenge and Avebury, an extraordinary flint arrowhead was snapped in two. Now, for the first time in nearly five millenia, the two pieces have been brought back together.

The first piece was unearthed five years ago during excavations at Marden Henge. When archaeologists from the University of Reading returned last summer, they found an elongated barb. Suspecting that the two pieces might fit, they brought it to The Wiltshire Museum where the original piece was kept, and nervously attempted to reunite them, on camera. Luckily, the two pieces fitted perfectly.
“It is without doubt the finest Neolithic arrowhead in the country. The skill and workmanship is phenomenal” Dr Jim Leary, from the University of Reading, said.
And it is a pretty remarkable piece. While many Neolithic arrowheads have barbs, or tails, they’re usually symmetrical and much, much shorter.
“This stunning arrowhead is too fragile to ever have been used. It must have been made for display, perhaps at ceremonies to mark a successful hunting expedition” said David Dawson, Director of The Wiltshire Museum.
And what’s even more remarkable is where the arrowhead was found; Marden Henge. Built around 2400 BC, Marden Henge lies almost exactly halfway between Stonehenge and the stone circle at Avebury. What’s more, it’s actually ten times the size of Stonehenge and is known to archaeologists as the biggest prehistoric monument yet found in Britain.
Situated right between its two more famous companions in the Vale of Pewsey, Marden Henge is right in the middle of a region of huge international archaeological importance, but by comparison remains relatively unexplored.
During the earlier excavations in 2010, the team found another two exquisitely worked Neolithic arrowheads, which have been described as the very best examples of Neolithic Britain. They too are extremely unusual in having asymmetric ‘tails’ or elongated barbs, which had been broken off thousands of years ago.
Last year, excavations also unearthed a fantastically well-preserved Neolithic building, along with pottery, flint and what appear to be the remains of a very large feast. The team also uncovered the remains of a Bronze Age teenager who was buried wearing an amber necklace.
These excavations were the start of a three year project which, if the discoveries so far are anything to go by, look set to transform our knowledge of the Neolithic people who not only built and worshipped at Stonehenge, but constructed a monument ten times its size just a few miles further along the River Avon.
You can find out more about Marden Henge in the opening episode of Digging for Britain, which airs tonight (10th March) on BBC4 at 9pm.
If you would like to take part in the excavations in July, you can join DigVentures for a Dirty Weekend of Neolithic archaeology at the biggest prehistoric monument in Britain.