Either as hunters or the hunted, prehistoric humans interacted with saber-toothed cats 300,000 years ago.

[size=32]Any artist-created images you may have seen depicting prehistoric humans hunting or fighting with saber-toothed cats may not represent a scene very far from reality about 300,000 years ago when Lower Paleolithic humans actually did share the same environment with the big cats in what is present-day Europe.[/size]
According to scientists who have studied remains unearthed at the archaeological site of Schöningen in north-central Germany, the wooden spear-making humans who lived in the region of the site had up-close-and-personal contact with the European saber-toothed cat (Homotherium latidens) about 300,000 years ago. Whether they interacted with the big cats as their predators (hunter) or as defenders (the hunted), is still open to question and debate.
The clues come from their examination of five fossil teeth and one fossil humerus identified as representing two saber-toothed cats, found within the context of the finds unearthed at the famous Schöningen site, where, in addition to other items, archaeologists recovered a number of wooden spears, one lance, a double pointed stick, and a burnt stick dating to the Holsteinian, c. 300 kyr.
"The humerus is a unique specimen; it shows evidence of hominin impacts and use as a percussor," reported the researchers in their report abstract, the full study of which is now published and available online as an article in press in the Journal of Human Evolution. "The Homotherium remains from Schöningen are the best documented finds of this species in an archaeological setting and they are amongst the youngest specimens of Homotherium in Europe," the researchers added.*
___________________________________________ 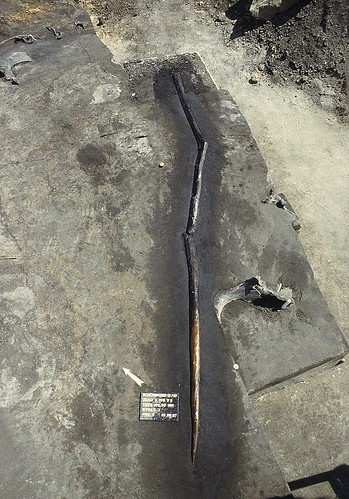 Spear no. 8 at Schöningen in situ. P. Pfarr NLD, Wikimedia Commons
___________________________________________
The study of the finds has implications for understanding the relationship between these Paleolithic humans and the carnivores who lived within the same ecological context. "The presence of this species as a carnivore competitor would certainly have impacted the lives of late Middle Pleistocene hominins," the researchers concluded. "The discovery illustrates the possible day-to-day challenges that the Schöningen hominins would have faced and suggests that the wooden spears were not necessarily only used for hunting, but possibly also as a weapon for self-defense."*
The Paleolithic site of Schöningen is best known for the earliest known, completely preserved wooden weapons or artifacts uncovered there by archaeologists under the direction of Dr. Hartmut Thieme between 1994 and 1998 at an open-cast lignite mine. Deposited in organic sediments at a former lakeshore, they were found in combination with the remains of about 16,000 animal bones, including 20 wild horses, whose bones featured numerous butchery marks, including one pelvis that still had a spear protruding from it. The finds are considered evidence that early humans were active hunters with specialized tool kits as early as 300,000 or more years ago.
The saber-toothed cat fossil study was conducted by Jordi Serangeli of the Institute for Archaeological Sciences, University of Tübingen, and colleagues from other institutions, who also authored the recently published paper.
_________________________________________________________
*Jordi Serangeli, et al., The European saber-toothed cat (Homotherium latidens) found in the "Spear Horizon" at Schöningen (Germany), Journal of Human Evolution, 23 October 2015.