A tip from a rancher in Mexico’s Sonoran Desert has led to an unexpected find: an ancient encampment where members of the Clovis culture hunted an elephant-like animal never before seen in North America’s archaeological record.
More importantly, the camp turned up a host of exquisite stone points and bone ornaments, with organic material dated to 13,400 years ago, making it one of the oldest and southernmost Clovis sites yet found on the continent.
Archaeologists were tipped off in 2007 to unusual bones eroding out of a cut bank some 200 kilometers south of the Arizona border, at a site given the ominous name El Fin del Mundo, or The End of the World. 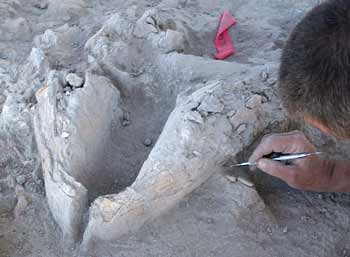 The jawbone, or mandible, of a gomphothere as it was found, upside down, at El Fin del Mundo excavation site. (Courtesy Vance T. Holliday) [Learn about another striking find made in northern Mexico: “Oldest Human Footprints in North America Identified“]
There they found the remains of two animals that initially proved difficult to identify.
“At first, just based on the size of the bone, we thought maybe it was a bison, because the extinct bison were a little bigger than our modern bison,” said University of Arizona archaeologist Vance Holliday, in a press statement.
After uncovering the distinctive jawbone and teeth of one of the specimens, they realized they had found gomphotheres, odd-looking, long-jawed ancestors of modern elephants once thought to have vanished from North America before humans arrived.
Much older gomphothere specimens had been found elsewhere in North America, Holliday said, and Clovis hunters were known to have stalked their evolutionary cousins, the mammoths and mastodons. But this is the first evidence that humans shared the continent with, and hunted, gomphotheres.
“This is the first archaeological gomphothere found in North America, and it’s the only one known,” Holliday said, before ticking off the many firsts marked by the find.
“This is the first Clovis gomphothere, it’s the first archaeological gomphothere found in North America, it’s the first evidence that people were hunting gomphotheres in North America, and it adds another item to the Clovis menu.”
Evidence of the creatures’ fatal encounter with humans includes four large stone points, all crafted in the characteristic fluted Clovis style, found in situ among the animals’ remains.
Three more points were found within two meters of the animals — including one striking projectile fashioned out of crystal clear quartz — along with stone flakes, two small carved bone ornaments, and burned bones. 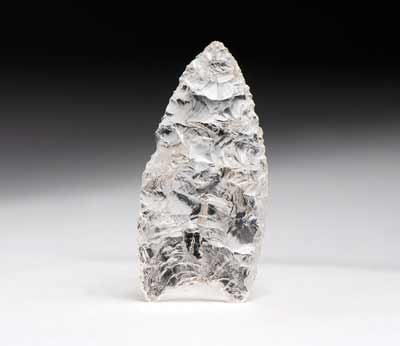 A clear quartz Clovis point found near the bone bed at El Fin del Mundo.
Although very difficult to shape into a tool, quartz was used by Clovis tool makers at several sites.
(Courtesy INAH Sonora)
In addition to shedding light on the historical longevity of the ancient elephants, the find perhaps more importantly may broaden our understanding of the Clovis, thought by many to have been the continent’s first widespread indigenous culture.
Like many things in American archaeology, when and where the Clovis culture originated are topics of debate.
But the dates from El Fin del Mundo eclipse almost every other reliably dated Clovis site on record, including Montana’s Anzick site, which produced the remains of a 13,00o-year-old Clovis boy.
[Read about a recent breakthrough in the study of Clovis DNA: “Genome of America’s Only Clovis Skeleton Reveals Origins of Native Americans“]
Only a bison-hunting camp known as the Aubrey site, discovered in North Texas in 1988 and dated to more than 13,400 calendar years ago, is definitively older, Holliday and his colleagues said.
And the presence of early Clovis sites so far south may suggest that the culture actually arose in the Southwest, they noted, and not in the northern Great Plains, as many have previously theorized.
“Including Aubrey and now El Fin del Mundo in the corpus of dated Clovis sites raises the possibility that Clovis originated in the south,” they write in their study, published today in the Proceedings of the National Academy of Sciences.
And if it did originate in the North, they add, then the Clovis culture must date back even farther than 13,500 years in order for its members to have reached these southern latitudes.
All told, the evidence emerging from El Fin Del Mundo promises to revise our understanding of the continent’s most influential native cultures, from its practices and its range to the ancient environment with which it interacted so successfully.
As the team concludes in its paper, “These data expand our understanding of the age range for Clovis, Clovis diet, raw material preference, and the late Pleistocene megafaunal assemblage of North America, and provide evidence for a southern origin of the Clovis.”
_________________
Vente d'objets préhistoriques reconstitués :
http://revivre-la-prehistoire.wifeo.com