Archaeologists exploring the remote reaches of a military training base in southern California have uncovered nearly 9,000 artifacts that represent more than 11,500 years of human history in the Mojave Desert, a new study reports.
The artifacts, found at multiple sites across the base, include more than 8,830 stone tools, flakes, ground stone, pieces of ceramic, and bone, as well as a single large biface blade that researchers say is a “classic” example of the 13,000-year-old style known as Clovis. 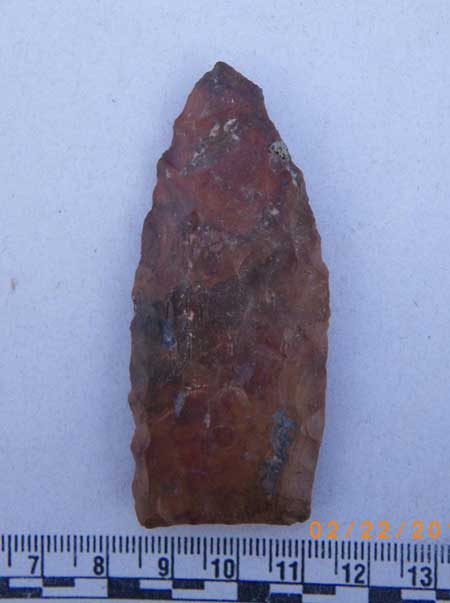 This biface blade, fashioned in the Clovis style from local jasper, was found near the surface on the Marine Corps Air Ground Combat Center, and is thought by archaeologists to be around 13,000 years old. (Courtesy Far Western/MCAGCC)
The relics were just part of the finds produced by a comprehensive survey of the Marine Corps Air Ground Combat Center (MCAGCC), a training base covering more than 2,400 square kilometers (930 square miles) of desert near the town of Twentynine Palms, California.
In addition to surveying the surface and conducting test excavations, archaeologists compiled 30 years worth of unpublished research based on digs and surveys done on one of the nation’s largest training bases.
The evidence turned up by this research led archaeologists to propose that two sites on the base be placed on the National Register of Historic Places.
“This … recent work demonstrat[es] the presence of hunter-gatherers in the MCAGCC before the Younger Dryas [a period of global cooling that began about 13,000 years ago], and the potential preservation of significantly ancient buried deposits in some areas,” the researchers write, in the journal Paleoamerica.
Among the finds was the lone biface blade, discovered near the surface in a northern stretch of the range.
Fashioned from local jasper and about 7 centimeters (3 inches) long, the point is the first of its kind to be found on the base, said Dr. Ryan Byerly, an archaeologist with the firm Far Western Anthropological Research Group, who reported the findings with colleague Joanna Roberson.
“The specimen … is an example of a ‘classic’ Clovis form,” he said in an interview.
“In terms of size, this specimen is similar to various Clovis points from Texas, Blackwater Draw [in New Mexico], and Domebo [in Oklahoma].”
The point itself can’t be dated, he noted, but its deposition suggests that its age probably falls within the range of other well-dated Clovis sites, which typically date from 12,800 to 13,100 years ago.
“As a probable example of a Clovis form, there is no reason to suspect that the specimen is not contemporaneous with dated Clovis components,” he said.
Elsewhere on the base, the review of previously unpublished research showed that dozens of other distinctive stone points had also been uncovered, dating back as much as 9,000 years.
Near a dry lakebed, or playa, by the western border of the base, for example, archaeologists in 2000 found at least 19 points fashioned in the Western Stemmed Tradition at various sites in the area, as well as more than 14 so-called Pinto points, whose triangular style has been found around the Great Basin at sites dating back 6,000 to 8,500 years.
Estimating the ages of these artifacts is challenging, Byerly noted, because the dynamics of the local geology has caused deposits from different periods to mix together.
“Most sites around regional playas are palimpsest surface deposits, and very few demonstrate single component integrity,” Byerly said.
“Local geomorphology is complex, in that very old surfaces may be exposed on the contemporary surface, and very young materials may be very deeply buried.”
But the most productive site that the team studied was by an outcrop of lava from the Mojave’s extinct Pisgah volcano.
Test excavations at a rocky blister of lava turned up 8,830 artifacts, discovered in several layers that together span up to 9,800 years of human occupation.
The uppermost layer, on and just below the surface, revealed stone flakes and other artifacts dating from around the 13th century, Byerly noted.
“Surface artifacts, and likely many of those extending to 30 or 40 centimeters below the surface, reflect one or more occupations that, based on radiocarbon analysis of a surface hearth, date to around 1290 AD,” he said.
Further down, a new layer of sediment appeared, along with a “sharp increase” in tool-making fragments, particularly obsidian and other volcanic rock, and weathered pieces of deer and sheep bone.
Unlike most stone tools, obsidian can be dated, using a technique called obsidian hydration analysis, and it showed that these deeper components of the site seemed to have been used several times, from 8500 to 6500 years ago.
[Learn about another recent discovery: “10,000-Year-Old Stone Tool Site Discovered in Suburban Seattle“] 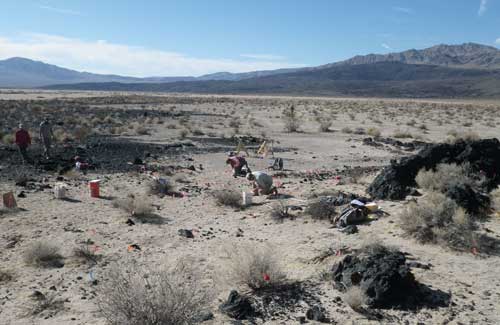 Archaeologists studying the areas around a lava flow on the base found nearly 9,000 artifacts at various depths, spanning some 9,800 years of human occupation. (Courtesy Far Western/MCAGCC)
In addition to adding voluminous and valuable data to the study of human history in the Mojave Desert, the findings might also contribute to the understanding of the movement of people around in the ancient West, Byerly noted.
Most of the artifacts detailed in the new Mojave study date from 7,000 to 9,000 years ago, he said — the same time when a decrease in human activity appears in the archaeological record several hundred kilometers away, in the northern Great Basin.
Changes in the climate several thousand years ago led to drier summers and colder winters, in places like Nevada, southern Idaho, and southeastern Oregon, he noted.
While this period coincides with decreased signs of human activity in those areas, the new research seems to show increased activity around Twentynine Palms.
This raises questions about whether ancient hunter-gatherers migrated from the colder, drier northern Great Basin to what’s now the Mojave Desert, beginning around 7,000 years ago.
“Lowland conditions in the Mojave Desert, responding to similar sets of environmental triggers, may have manifested differently and actually been a boon to human habitation,” Byerly noted, adding, “This is an undeveloped hypothesis, however.”
[See more new insights into ancient migrations: “13 Ancient Villages Discovered in Wyoming Mountains May Redraw Map of Tribal Migrations“]
In all, the thousands of artifacts and 30 years of research aided Byerly and his colleagues in recommending that two sites on the Marine Corps Air Ground Combat Center be placed on the Department of the Interior’s National Register of Historic Places.
One is the site by the lava blister that turned up artifacts spanning 9,800 years; the other is along the same formation, where previous research had found an obsidian flake estimated to date between 9,000 to 11,700 years old.
[Read about another recent find in the desert: “Over 1,000 Ancient Stone Tools, Left by Great Basin Hunters, Found in Utah Desert“]
“All of the sites are important in their own right,” Byerly said, “but among those we evaluated, we recommended that those on the western edge of the Pisgah Flow be listed on the National Register.
“In my estimation, this portion of the lava flow has the best potential aboard [the] base to preserve early dated sites.”
Byerly and his colleagues report their findings in the journal Paleoamerica.
_________________
Vente d'objets préhistoriques reconstitués :
http://revivre-la-prehistoire.wifeo.com