Scandinavia and the Huns: an Interdisciplinary Approach to the Migration Era

Scandinavia and the Huns: an Interdisciplinary Approach to the Migration Era

Scandinavia and the Huns: an Interdisciplinary Approach to the Migration Era
By
Medievalists.net
– July 15, 2014Posted in: Articles 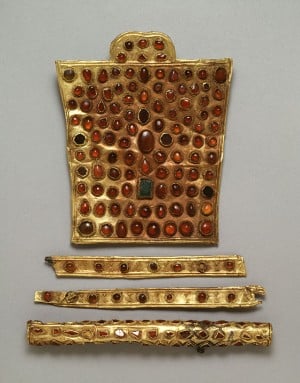 Hunnish -Set of Horse Trappings
Scandinavia and the Huns: an Interdisciplinary Approach to the Migration Era
Lotte Hedeager
Norwegian Archaeological Review: Vol. 000, No. 000 (2007)
Abstract
The aim of this paper is to discuss the early Migration period as a particular period of ‘short term history’ and its formative impact on the Scandinavian longue duree in the first millenium. During this particular period of time, the object world of Scandinavia demonstrates radical changes in symbolic representation, followed by long term continuity and social/mental resistance to change. It is argued that the Huns, as a historical fact, were present in Scandinavia in the early fifth century. Their impact was to generate an‘episodic transition’ that opened up a whole new set of social, religious andpolitical strategies, in Scandinavia in particular as well as in Barbarian Europein general, and gave rise to a new Germanic identity in the aftermath of the Roman Empire.

The classic Annales model of historical time, developed by Fernand Braudel in 1949, deals with different historical horizons, all of which are relevant to the discipline of archaeology: longue duree, conjunctures
and evenements (e.g. Hodder 1986, 1987, Bintliff 1991, 2004, Knapp 1992, Andren 1998,Morris 2000
; , Moreland 2001, Hodder &Hutson 2003, Harding 2005, Harding et al  .2006). However, it is the scale of long-lived/slow changing structures, la longue duree ,and the medium term, conjunctures, which embrace the concept of mentalities and thereby serve as powerful theoretical models for studying the development of past human societies from the inside in a long-time perspective.